May 2016 saw my best friend and I embark on a week’s holiday to Greece. At the start we had planned to spend the week in Athens, see the impressive Acropolis, the Agora, climb Mount Lcyabettus to admire the views of the city, catch some rays and eat and drink too much. But then I become engrossed in our guidebook, researching the Internet (Matt Barret’s site is fab) and came up with an elaborate plan of the sites we could see on our holiday. Athens was to be our base for the week, as we didn’t want to be staying in different places. We were to have 3-4 days in Athens and hire a car for 3 days to see Corinth Canal, Ancient Corinth, Mycenae, Epidaurus, Cape Sounion and Delphi.

I loved Athens from the start. I adored the narrow cobbled streets that twisted around the Acropolis, The Forum and Plaka, I felt warmed by the hustle and bustle of Monastiraki and enriched when walking about Filopappos Hill. The sites that Athens has to offer are truly stunning. The Parthenon stands proud on the Acropolis keeping watch over the city and wandering in its presence you really do feel like you are up with the Gods. The Agora has a very peaceful atmosphere as you meander throughout the ruins making it easy to forget that you are in the middle of a city. 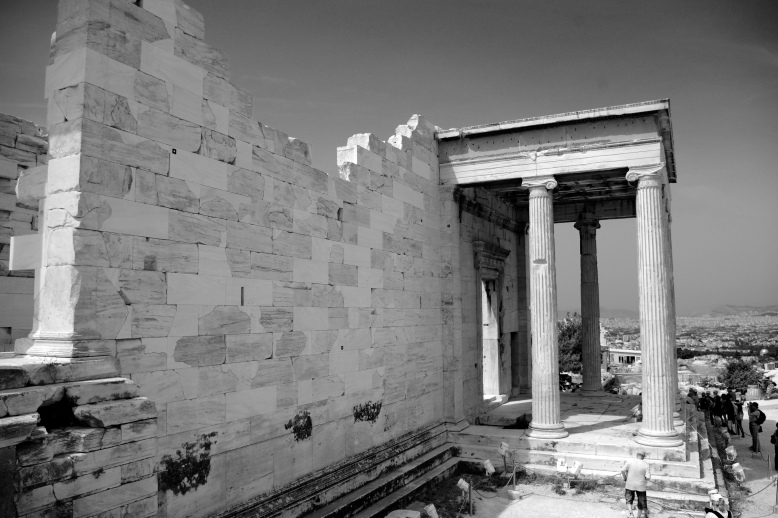 Back of the Erechtheion on the Acropolis

The Greeks are incredibly friendly and are experts in ‘talking the talk’ to persaude you to dine in their Tavernas’! They are also only too happy to share with you their extremely strong liquor at any opportunity they get; it should come with a warning label not to mix with sunstroke as I unfortunately found out on my final night!

The real adventure started once the hire car was in our, oh so capable hands and we had to find our way out of Athens! Our first stop was the Corinth Canal, a canal that connects the Gulf of Corinth with the Saronic Gulf in the Aegean Sea. This was just a quick stop on our journey to admire the remarkable handy work that was carried out in the late 1800’s before continuing on to find Ancient Corinth.

Ancient Corinth is a site that deserves more visitors; slightly off the beaten path it was clear that not many tourists come here, but they so obviously need the money to help continue to restore the grounds. However away from the crowds we were given a real chance to appreciate the ruins and it certainly did feel like we’d taken a step back in time. Ancient Corinth is surrounded by nature where the wild grass has been allowed to grow and the wild flowers allowed to blossom, set against a rocky crag on one side and looking over a small village on the other. Corinth is currently being restored and you will see this when visiting, but at the moment you get to see it in its semi raw state, which for me was the big appeal. 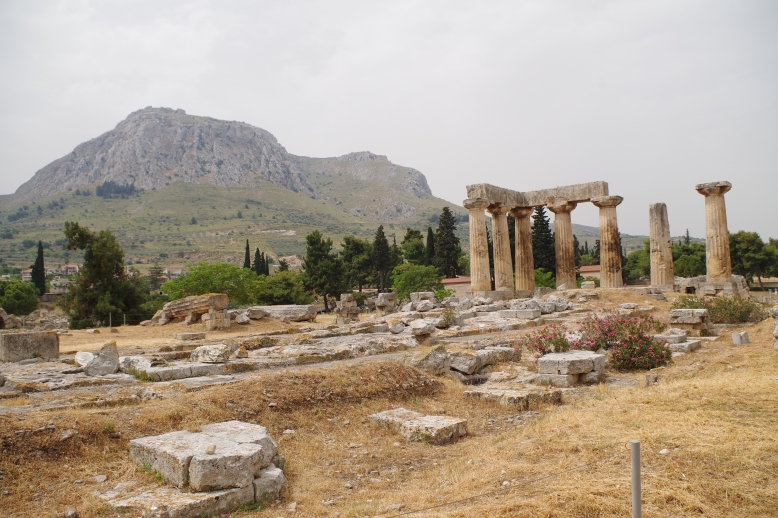 Our next stop was Mycenae; one of the most important archaeological sites in Greece. As you enter through the impressive Lion’s Gate you get a sense of how imposing it would have been in ancient times, and its only as you climb higher throughout the ruins of Mycenae you realise just how large the place is. Whatever way you look you’ll be rewarded with beautiful landscape. Before you go make sure you see the Tomb of Clytemnestra!

Our third stop in the Peloponnese was to Epidaurus to the Sanctuary of Asklepios (the God of medicine). The guidebooks do not do this place justice. Firstly the location is fairly large, there is lots to see and the ruins are still very much in the raw as restoration appears to be in the early stages. Surrounded by wild grass, trees and picturesque countryside this is a lovely place to come to. But the jewel in the crown really is the theatre, climb to the top, sit on the highest step just under the canopy of the trees and take in that view; even on a slightly misty day the scenery was amazing so I can only dream of what it would be like on a clear day. I am so grateful we came here; it would have been a crime to miss it!

The next day we took the coastal drive down to Cape Sounion. We enjoyed a feast of a lunch at the seaside Taverna Ilias before spending the afternoon relaxing on the beach. As early evening came, we headed to The Temple of Poseidon (the ancient Greek God of the sea); perched on the craggy rocks of Cape Sounion. What makes this site so special is its unique location and the spectacular sunset you get to see. Having walked around the temple ruins, appreciating how imposing it once must have been, we sat on the edge of the rocks, shutting out the rest of the world and watched the sun go down. 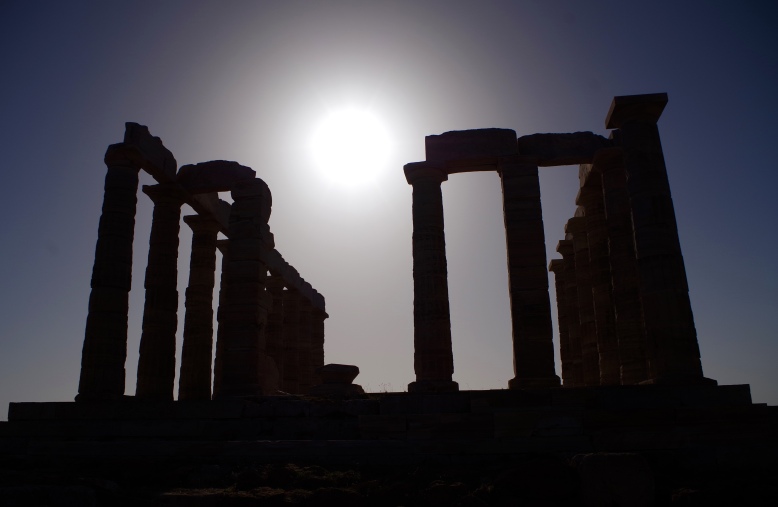 Cape Sounion as the sun starts to set

Our third day was destined for Delphi. Ancient Delphi simply blew me away. According to Greek Mythology Zeus released two eagles, one to the east and another to the west, and Delphi was the point at which they met after circling the world, and was therefore known as the centre of the World. The drive to Delphi was very straightforward, only a couple of hours north of Athens on good well sign posted roads. Once you hit the mountain ways you are rewarded with splendid scenery and you’ll be guided by the snow capped peak of Mount Parnassus. Just before reaching Delphi you’ll drive through the pretty town of Arachova, which in winter is an active ski resort. We return here later.

The views from Ancient Delphi across the valley are truly stunning, and the further and further you climb amongst the ruins the more magnificent the views become. I could have sat here for hours just gazing across the mountains. Ancient Delphi itself is in very good restored condition and as long as you have a normal level of fitness is easy to move around. Away from the main ruins back down across the road you will find the sanctuary of Athena and this beauty did not fail to impress me. It is as spectacular as it appears in the photos and very empowering how it just sits there.

We stopped in Arachova on our way back to walk the quaint streets and browse the little souvenir shops and found a lovely place to stop for lunch to refuel and relax. This picturesque town will also satisfy your needs with exquisite vista as a final farewell before heading home. 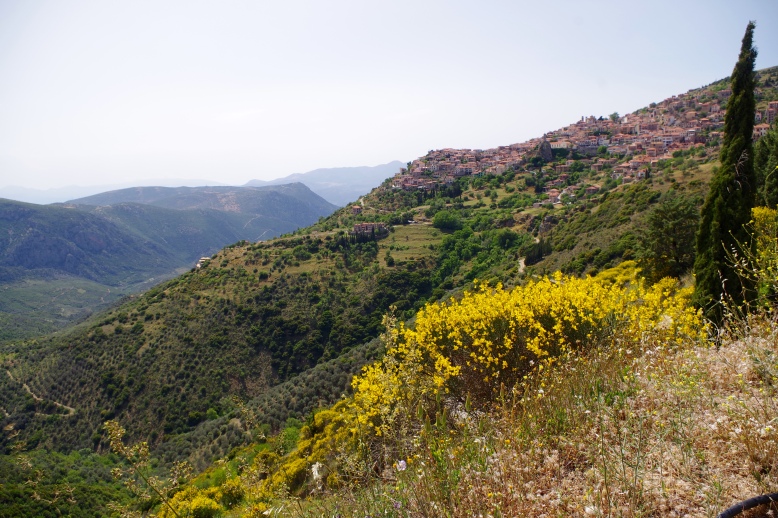 By our final and third day of driving in and out Athens I had learnt where my horn was and how to use it, I turned out to be a pro at navigating the narrow one-way streets, I discovered you do NOT to give way to others and I became proficient at avoiding pedestrians and mopeds! As we parked the car up on the final day we high-fived each other on our piloting and driving skills and headed straight to the bar!

On our final night we were lucky enough to see one more stunning sunset from out hotel rooftop terrace, sipping on a perfectly mixed cocktail over looking the Acropolis. It really was the end to a perfect week. 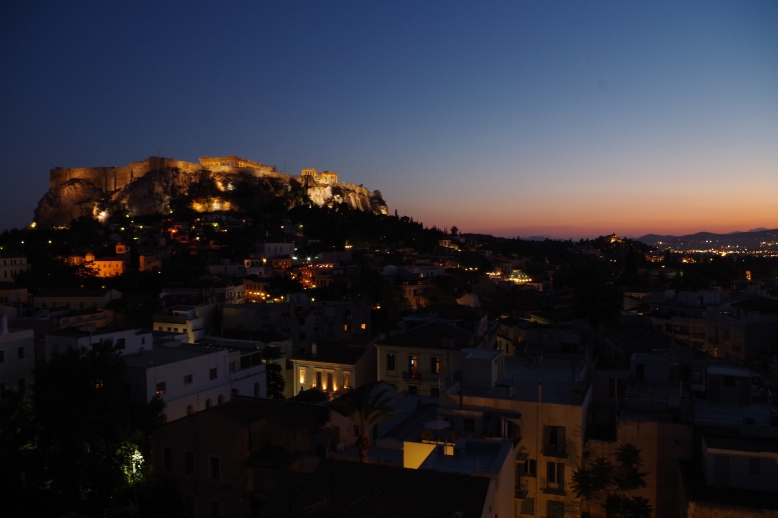 I will definitely be returning to Greece…